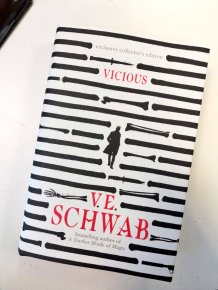 So, Schwab…
Boy! does she come with the hype.

Nothing more, nothing less, not astounding, not even great. Vicious is just fine (mediocre fine, not fine as in fine ass specimen fine). It’s a light, simple, easy fantasy that sacrifices a possible deeper level to be the commercial-friendly semi suspenseful thriller that it is. You can probably predict the end fairly easily. NOthing new.

It started out smashingly well, I have to say. I loved the dichotomy and dynamic of the slightly erratic and mysterious Eli and the jealous Victor. I love writing that explores jealousy instead of directly villainizing or dehumanizing it. (Give me more please). The chopped-up timeline worked to a tee and it gave off the whiff of the future antagonism in the past parts, while also keeping it fluid and grey. That was fun. Eli and Victor are also pre-med students and I like science so that was alSO fun.
And then the story progressed. Ie, became the fantasy that you’ve read/watched/know endless times before, has little to no depth and is over-the-top easy storytelling.

END_OF_DOCUMENT_TOKEN_TO_BE_REPLACED

It’s been a LONG while since I’ve reviewed some of the Graphic Novels I’ve read. And unfortunately I haven’t read that many this year but here’s a short list of the three I have read.

I’m sure 95% of you are aware of who Joe Sugg is but for those who aren’t- he is a youtuber and like every other youtuber he too has written a book. I’m giggling because anyone who’s followed us long enough can probably hear the rant coming.

END_OF_DOCUMENT_TOKEN_TO_BE_REPLACED

This is another bookstagram readalong that I was a part of. The plan was to read ALL the three novels in this series. Here’s a heads up: That didn’t happen.

Because this book sucked balls.

I don’t know what I was expecting when I started the book. Just that EVERYONE loved it and were dying over the characters. And then I read it and I felt like such a party pooper. I don’t want to hate on books but if you give me a book like this where everything is so dull and cliche and basically nothing bloody happens? Hell yeah I’m going to piss over it.

END_OF_DOCUMENT_TOKEN_TO_BE_REPLACED

Now based on my review of the first book one might think I wouldn’t continue the series but I felt it had potential to be something more and so I did… also because I was part of a read along on instagram… so yeah.

My view of the plot: We pick off right where we left off at the end of the first book (which is something that I’ve never seen before) and this time Laia is hell bent on getting her brother out of the worst prison, Kauf. And Elias is with her through and through.

Now that Marcus is Emperor, he forces Helene, the newest Blood Shrike a.k.a second in command, to hunt down Elias and so begins a great book.

To be honest, I’m glad I continued on to the second book of this series because I really enjoyed this book and here are the reasons why:

END_OF_DOCUMENT_TOKEN_TO_BE_REPLACED

In a world where ash falls from the sky, and mist dominates the night, an evil cloaks the land and stifles all life. The future of the empire rests on the shoulders of a troublemaker and his young apprentice. Together, can they fill the world with colour once more?
In Brandon Sanderson’s intriguing tale of love, loss, despair and hope, a new kind of magic enters the stage— Allomancy, a magic of the metals.

This book! How on earth have I not read this book earlier?? It’s absolutely fabulous. It has ZERO dull parts. Yes, you read that right (at least according to me). Let me start with the plot.

Mistborn: The Final Empire is about a world where the good guy lost the battle against evil and now the world is forced to live under the cruelty of the bad guy, who in this book is the Lord Ruler.

It follows the story of a thief named Kelsier, who was caught by the Lord Ruler and was sentenced to death at the pits of Hathsin. But he escaped the mines and decided to form a band of other thieves to overthrow the cruel Lord Ruler who tortured the Skaa and always preferred the nobility.

The Skaa and the Nobles- this was how society was divided under the Lord Rulers command and this was what Kelsier and his crew of mistings wanted to put an end to. The discrimination.

We also follow the life of a street urchin who steals to survive. She has powers that she is not aware of.

She is Mistborn. Someone who can ingest different metals and then “burn” them to give oneself different types of powers as compared to a Misting, who can only burn one particular metal. This ability to burn metals is called Allomancy. The ability is hereditary and is only “given” to the nobility.

I don’t even need to say anything more because don’t you see that this plot is so darn unique??

The best thing about this book is how the world building is done so beautifully. I understand everything that I should be understanding. And after a long time I have finally found another world I really want to live in, as a Mistborn of course.

And unlike a few other fantasy books, The Final Empire sucks you into its world in the first few pages.

Brandon Sandersons writing is very different to what I usually read. It’s different in an amazing way. The sentences had this flow that made it difficult for me to stop reading it but in the beginning I did stop a lot because the world that I was learning about required so much attention that I would be exhausted after 10-15 pages.

I say this as a good thing because I love reading about a world that the author describes with such detail because it kind of tells me that if he/she is telling me so much right now I bet there is even more I could learn about this amazing world in his/her next book.

The best part about Sandersons writing is the way he describes his action scenes. They are SO GOOD! From throwing glass knives to jumping off of window latches, I was on edge every time I read an action packed scene. Whenever I would think ‘Okay I should stop reading for today’ I would encounter a para where the character starts fighting and then its just, goodbye sleep! Later on I started to stop reading just before I thought there was going to be an action scene because I did NOT want to be interrupted in the middle of that.

The characters on the other hand, are life-like. I want them to be real. They have their flaws but I love them so much that I just overlook them. You have Kelsier and Vin as the main protagonists and Elend, Dockson, Breeze, Ham, Yeden, Clubs and Sazed as important side characters.

Kelsier is the crew leader and my favourite character. He is the one who brought everyone together to bring down the Lord Ruler. He has a reputation that he is proud of. He is egoistic at times and really loves all the attention and gossip that surrounds him. But he is also funny and witty when the entire situation of the characters depresses you, he knows his responsibility as a leader and he has the quality of a leader in him. And trust me when I say that Kelsier grows on you. This little shit is so charming that you can’t help but love him.

Vin is someone who has been betrayed so many times that she finds it difficult to trust people. I love her character development because she has been given such a long time to become friendly and trusting that it doesn’t seem forced. She grows from this unconfident and apprehensive girl to a brave rebel leader.

I also loved how we got to see the nobility up close through her, so it wasn’t just about the oppressed Skaa. We got to see the politics among the nobles and we see Vin form her own opinion of the nobles despite the people around her categorizing all nobles as cruel.

I love how Kelsier and Vin developed a very trusting father-daughter bond which made a “certain” scene very heartbreaking and I so wished that it hadn’t happened but it did and the worst part is that I get why it happened! It is totally justified and I hate it!

Lord Elend is every girls dream boy, I mean who wouldn’t love a rich heir who reads at balls? And I totally ship Elend with Vin. They have such cute and adorable moments in the book that made me smile and giggle like an idiot.

And I love the constant banter between Ham and Breeze. Ham is such a philosopher and Breeze just doesn’t care about almost everything which makes conversations between these two hilarious.

I guess my favourite side character would be Sazed. He is always reading and he is Vin’s go to guy whenever she wants to talk about something important. He reminds me of JARVIS from Iron man because Sazed is always logical and he provides you with all the right information. He is a badass but also super composed like a sensei. If I ever have the choice to select a badass side kick it would definitely be Sazed.

Now by the end I couldn’t stop reading this book, it kept pulling me in. The book is very unpredictable, which I loved. I loved how things were not as they seemed. I loved how they overcame their problems. And I loved how the book ended. I also cried multiple times around the end of this amazing book.

I guess you could read this as a standalone novel but WHY WOULD YOU WANT TO DO THAT?? I can’t wait to read more of Brandon Sanderson and I can’t wait to meet him at the Emirates Litfest this year in Dubai. I’ll probably make a mess of myself if I’m ever given the chance to meet him but I just want to stroke his face… Or maybe not.

Recommendation: To anyone who wants that escape from reality into a world that will make you cry and laugh. And also to those who want an immersive read.

Ratings: All the adorable things that I can possibly give it.

Lots of love and pasta,

Like Loading...
Hi there! This is Raven and Beez, who have passed their teen years together and have been blogging for years!

To contact us, check out our "Tell Us" page. However, we don't take review requests anymore, so please refrain from sending us any!
Happy scrolling!
Follow Raven & Beez on WordPress.com