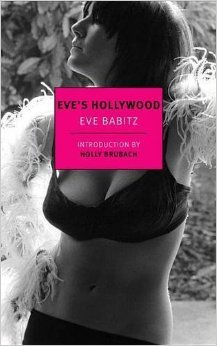 Immortalized as the nude beauty facing down Duchamp and as one of Ed Ruscha’s Five 1965 Girlfriends, Babitz’s first book showed her to be a razor-sharp writer with tales of her own. Eve’s Hollywood is an album of  vivid snapshots of Southern California’s haute bohemians, of outrageously beautiful high-school ingenues and enviably tattooed Chicanas, of rock stars sleeping it off at the Chateau Marmont. This “daughter of the wasteland” is here to show us that her city is no wasteland at all but a glowing landscape of swaying fruit trees and blooming bougainvillea, buffeted by earthquakes and the Santa Ana winds—and every bit as seductive as she is.

This book and me just could not get it ON. A shame really, for all our intents and purposes, this could have been an average -above average even!- one night stand, but we ended up on two sides of the bed, me, painfully embarrassed trying not to stare or gape, him, jerking off.

It’s an embarrassing story but I suppose we were both responsible. I didn’t bring any much knowledge of 1950s LA to the table, all I had was a ebbing intrigue of artist and celebrity circles in the revolutionary times. And he, with all his names like they meant something, really failed to make me care. Why don’t I actually go to the beach and have your risqué summer among thugs instead. I’d get to know actual people that way. In the end, we were both solely focused on enjoying ourselves, and the other wasn’t doing it for either of us.

Thank you for jerking off but we will never be seeing each other again. (Can I picture another sad night where we have no other choice but to painfully endure each others company? Sure but I would like not to. Could it turn our miles differently then? Who is to know?)

Would you want to live in LA?
Beez.

George, the protagonist, is adjusting to life on his own after the sudden death of his partner, determined to persist in the routines of his daily life. An Englishman and a professor living in suburban Southern California, he is an outsider in every way, and his internal reflections and interactions with others reveal a man who loves being alive despite everyday injustices and loneliness. Wry, suddenly manic, constantly funny, surprisingly sad, this novel catches the true textures of life itself.

A small meal but a full meal. An array of flavors but all cohesive and satisfactory circular. A firm patty, tough yet tender, buttery crumb. Pickles and mayo. Hand whisked, hand sliced, hand salted. Right after your carnivorous heart. Splash o’ intoxicant. Beauty and insecurity. Quite devastating in the end but only for the question, what if, what if there was more? All the more gustatory pleasures, that mouthfeel of balanced richness and common ground, those swirls dispersed in between that spoke of faraway things here contained. (Almost like (dark)chocolate in a burger.) Oh just what if! But that meal, it was there. Are you ravished or are you famished?

What do you think?
Beez.

Sydney’s dad is the only psychiatrist for miles around their small Ohio town.
He is also unexpectedly dead.
Is Sydney crazy, or is it kind of weird that her dad-a guy whose entire job revolved around other peoples’ secrets-crashed alone, with no explanation?
And why is June Copeland, homecoming queen and the town’s golden child, at his funeral?
As the two girls grow closer in the wake of the accident, it’s clear that not everyone is happy about their new friendship.
But what is picture perfect June still hiding? And does Sydney even want to know?
THE TRUTH ABOUT KEEPING SECRETS is a page-turning, voice led, high school thriller.

This is: Just another YA book. Complete with script and absent parent and angsty child voice. Maybe a little better than many. With this skirted off mystery on the top. A poor rendition into grief and death. With a smacking coping mechanism to go with. A strange half-present friendship. And an unfulfilled heart. Another friendship. The one from that John Green book. Overall nothing really special. Or new. Just your typical. YA book

All of this is to say that. I hate genre publishing. And that fiction should be a cause for digging into something. Not to tie the strings and resolve a long chapter. And I like deeper contemplation. And that this is this authors’ debut. And she’s hardly 20. Which means she’s allowed. All the tropes and tribulations. All the better if she gets to make the sweet dough for life through it. Even better if it appeals to other people. I just hope the industry makes spaces for spillings.

This is also to say. That I hate myself the most. But the review wouldn’t come out any other way. Take my lackluster apology.

(Does anybody reading this care about this blog? Should we just shut it?)

Keiko Furukura had always been considered a strange child, and her parents always worried how she would get on in the real world, so when she takes on a job in a convenience store while at university, they are delighted for her. For her part, in the convenience store she finds a predictable world mandated by the store manual, which dictates how the workers should act and what they should say, and she copies her coworkers’ style of dress and speech patterns so that she can play the part of a normal person. However, eighteen years later, at age 36, she is still in the same job, has never had a boyfriend, and has only few friends. She feels comfortable in her life, but is aware that she is not living up to society’s expectations and causing her family to worry about her. When a similarly alienated but cynical and bitter young man comes to work in the store, he will upset Keiko’s contented stasis—but will it be for the better?

That blurb! I’d like to know the amount of people it fooled into believing that this book is a quirky romance. I know it did me! It’s fine though, because it’s infinitely better than any romance could be.

END_OF_DOCUMENT_TOKEN_TO_BE_REPLACED

So, Schwab…
Boy! does she come with the hype.

Nothing more, nothing less, not astounding, not even great. Vicious is just fine (mediocre fine, not fine as in fine ass specimen fine). It’s a light, simple, easy fantasy that sacrifices a possible deeper level to be the commercial-friendly semi suspenseful thriller that it is. You can probably predict the end fairly easily. NOthing new.

It started out smashingly well, I have to say. I loved the dichotomy and dynamic of the slightly erratic and mysterious Eli and the jealous Victor. I love writing that explores jealousy instead of directly villainizing or dehumanizing it. (Give me more please). The chopped-up timeline worked to a tee and it gave off the whiff of the future antagonism in the past parts, while also keeping it fluid and grey. That was fun. Eli and Victor are also pre-med students and I like science so that was alSO fun.
And then the story progressed. Ie, became the fantasy that you’ve read/watched/know endless times before, has little to no depth and is over-the-top easy storytelling.

END_OF_DOCUMENT_TOKEN_TO_BE_REPLACED

This book will only get good reviews.

Not because of the book oH no! It’s because Hank Green,- the entire vlog brothers enterprise – are Great Advertisers.

I mean, I picked it up so blame me.

I believe in principle that YouTubers should not write memoirs and self-help books unless they’re an in-depth one on YouTube specifically. But that’s not how the world works is it? This world works on a if-it-cashes-in basis.

END_OF_DOCUMENT_TOKEN_TO_BE_REPLACED

As hardcore bookworms we always come across great books. But how often is it that we come across many books by the same author that are equally amazing? And the authors also tend to be super cool people? The answer (for us at least) is “rarely” but that doesn’t mean there aren’t enough to be put into a top 5 category.

So here’s our list of authors we look up to. Because if we can write stories like them, our life would be set!*

END_OF_DOCUMENT_TOKEN_TO_BE_REPLACED

It’s absolutely impossible for me to talk about the plot of this book without giving away major spoilers of the first book (review here) AND this book. So in an attempt to keep this review SPOILER FREE, I’ll try to be as vague as possible.

END_OF_DOCUMENT_TOKEN_TO_BE_REPLACED

I read this book right after Age of Swords which left me an empty shell, so naturally, reading a light and fluffy book helped. However, in all honesty, it didn’t satisfy me as much as I’d have liked.

END_OF_DOCUMENT_TOKEN_TO_BE_REPLACED

Like Loading...
Hi there! This is Raven and Beez, who have passed their teen years together and have been blogging for years!